The Secrets Of The Immortal Nicholas Flamel Wiki
Register
Don't have an account?
Sign In
Advertisement
in: Articles that need categories, Objects

The Four Swords of Power were used to create leygates and ley lines by the Archons and to create Shadowrealms by the Elders. They date from the Time Before Time and are believed by many to have been fashioned by the ancient Earthlords, although there is debate: Isis, an Earthlord, thinks Earthlords were unlikely to have fashioned the blades, as they worked with different materials; however, as with many Earthlord Artifacts, such as Kulkulan's mirror, the swords can be fueled with blood. John Dee began to search out for these swords after being told by Marethyu that his destiny lies with the swords. He first found Joyeuse, then Excalibur and Durendal . At the end of The Sorceress, he finally obtains Clarent, the last of the swords necessary to create leygates and ley lines. When the Four Swords are combined, in the order of Clarent, Joyeuse, Durendal and finally Excalibur, they create the Hook of Aether. Upon its creation it melted into the form of a hook; which is now in the possession of Marethyu. Dee can also use Excalibur and Clarent, one in each hand, to create a Shadowrealm gateway and/or a leygate. They are described as being identical except for minor differences in the hilt. Virginia Dare comments on this by saying that she would never recognize them invidually, except Clarent, because of its apparent black-and-red blade. Clarent and Excalibur join together to make a solitary stone sword in The Necromancer by Dr John Dee.

There are four main Elemental Swords, one for each of the four Elements, which combine to form the most powerful, the Sword of Aether. Each sword has a twin, except for Aether.  The swords' names, known holders, elements, and twin blades are:

Excalibur, The Sword of Ice, Clarent's twin, is 48 inches long and has a red diamond and dragons engraved on the hilt. Known users include King Arthur, Palamedes, Mars, Josh Newman, and Dr. John Dee. Anyone it hits will freeze, and it can cut through metal and stone. This sword killed Hekate and the great tree Yggdrasil and thus ended up destroying two other Shadowrealms; Asgard and Niflheim, as well as destroying the gates to six others. It also released Nidhogg, and has a light blue glow to it.

The Sword of Fire, also known as the Coward's Blade, is a 20 inch long sword made of dark grey stone. Unlike the other three swords, its texture is rough and bumpy rather than smooth. Its twin is Excalibur. Anything it touches will either heat up, melt, or catch fire. It is worth noting that when Nidhogg was pierced with the blade, it began growing a lava crust that expanded from the point of entry, namely its tail.

Durendal is the Sword of Air, Joyeuse's twin, was used by Roland. It is also known as the indestructible sword.

Joyeuse, the Sword of Earth, Durendal's twin, was carried into battle by Charlemagne.

The Sword of Time; shaped like a flat metal hook or sickle, this sword is made by combining all of the four Swords of Power, which will then burn and sear itself into the arm of the user. Currently in possession of Marethyu, it wields vast powers and grants immortality and invulnerability unlike other Immortals, allowing him to heal from any damage unless he is decapacitated or his spine is damaged, although even this cannot kill him, and he is immune to the effects of the Artifacts of Power due to wielding the most powerful of them all. Wielding the Aether also grants total and complete control of the five Elemental Magics (Air, Earth, Fire, Water, and Time), the ability to create Shadowrealms and not to mention hundreds of thousands, perhaps millions or even tens of millions of years of knowledge. This makes the wielder almost all-powerful and effectively omniscient.

Past Holders in the Books 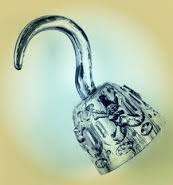 The Hook of Aether (All four swords fused)
Community content is available under CC-BY-SA unless otherwise noted.
Advertisement